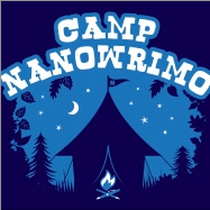 It’s the end of Camp NaNoWriMo week one and I have done so much of nothing! Literally nothing… Well, that’s not entirely true. I opened the document. Does that count as working? Can I give myself a sticker?

Honestly, if this were regular NaNo in November I’d probably be freaking out by now. However, for Camp NaNo I’m not writing a brand new 50,000 word novel. What I’m doing is trying to finish my rewrite of BYB. So, I’m not freaking out about not having anything done, I’m more frustrated at the fact that I haven’t got anything done.

Now that’s not to say I haven’t been writing. I’ve been working a lot (and I mean, a lot) on blog posts and fanfiction and stuff for Buzzfeed and other things that need doing. However, on top of those things, I will be spending the next three weeks working on finally getting my rewrite done.

How are all of you doing on Camp NaNo so far?

Also, in non-Camp NaNo news, I changed my second blog! It was jcarsonrants and it is now jcarsonreviews because I discovered I much prefer reviewing episodes of things I watch as opposed to what the blog was originally going to be for
Also, I’m on Buzzfeed now. I think I might have mentioned this before or I linked to a post on Buzzfeed or something, I don’t know. But yes, various forms of social media have officially taken over my life and I apologize if I have mentioned this before, but I’m really excited. Some of the stuff I’m posting there will be on this blog as well, but a lot of it will only be posted there. So if you want to check that out I’ve put the link below.

Good luck to everyone on their second week of Camp NaNo and on anything else you’re doing this month!

Or, if you don’t celebrate Easter, happy Sunday!