Torcon is finally here! Oh my goodness I feel like I have been waiting for this weekend forever and now it’s here!

This is the first time I’ve been to Torcon for a full weekend. I’ve gone for the past two years, but only ever went on the Saturday because it’s always been too expensive. This year it was still expensive, but the show’s been on for ten years and I decided to splash out a little bit and go for the whole weekend.

I’ve been really good about not splashing out anymore on any merchandise and I’m hoping to keep it that way. The way things are looking tomorrow I may not be entirely successful, but we shall see.

Alright, so I was a little late getting to the convention today so Richard Speight Jr. (who is MC-ing the whole event) was already on stage. However, I was there in plenty of time to see all the panelists.

The first one up was Alaina Huffman (Abbadon)!

Alaina was a little minute addition to the guest list after Ruth Connell unfortunately had to cancel. However, I’m so glad Alaina was here! She’s amazing and hilarious and she’s Canadian!

It was really funny because every time someone would answer a question she would give them candy. Richard Speight Jr. made the joke I think many of us were thinking which is that taking candy from strangers doesn’t matter when you’re at a Supernatural convention.

Something I really liked about Alaina’s panel was that she talked about women’s roles (or lack thereof) on TV and how women need to be given more roles. Yes! I am so glad she mentioned this especially at such a huge event for a huge show. It’s absolutely amazing and completely true.

Next up was Osric Chau (Kevin Tran) who spent a lot of time talking about Cosplay. For anyone who doesn’t know, Osric cosplays a lot and you can find tons of amazing photos of him in so many phenomenal costumes online! Seriously, Google it. 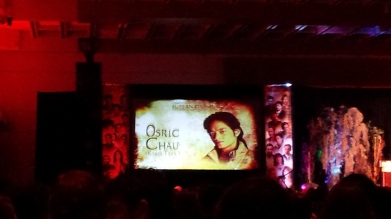 He was completely hilarious and talked a bit about how he’d like to see Kevin come back. Maybe Kevin could come back as a ghost, after all, ghosts can’t die again, right? Has he even seen the show?! Of courses ghosts die again, and it’s normally Sam and Dean who kill them! His reaction when he learned this was hilarious and it really was a great panel.

These panels were followed by the Supernatural Yes/No Trivia Game which was hilarious because by the time they got down to the final two people, it lasted forever! Both contestants gave the same answer as the other over and over again and often times they were both wrong! It was so funny.

One the Yes/No Quiz was over it was back to the panels and up next was Gil McKinney (Henry Winchester)!

Alright, so I’m a huge fan of Supernatural (obviously), but I’m also a huge fan of Once Upon A Time and I didn’t know that Gil McKinney plays Prince Eric on OUAT. 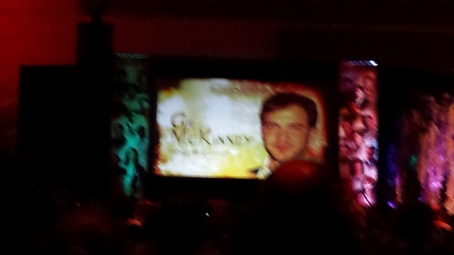 I had no idea! Looking back now I’m smacking myself in the forehead for not realizing it. It definitely makes rewatching OUAT all the more exciting now.

Something else I learned at this panel is that Gil McKinney is an amazing singer! Seriously fantastic. Go look him up on Youtube I guarantee there are tons of videos of him singing and you will not be disappointed.

I took a couple videos at karaoke, but I’m betting you can find some better quality ones on Youtube than what I got on my phone.

Gil McKinney is also the reason I may end up spending money this weekend as I’m considering buying a photo op with him. If I don’t do it this year then I’ll probably have to come back and do it next year cause he’s amazing and getting a photo would be awesome.

The final panelist was Erica Carroll (Hannah) who also talked about women’s roles on TV. One thing she brought up about this in regards to Supernatural was the relationship between Hannah and Cas which she didn’t like too much. 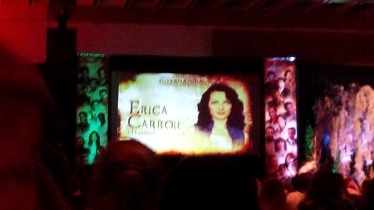 She said it was very easy to go that route and you know what, she’s right. You have a popular male character on the show and bring in a badass female character to work with him, it’s really easy to put them together and suddenly she just turns into a love interest.

I’m really glad that’s not what happened with Hannah and I’m definitely hoping we’ll see more of Erica Carroll in the new season!

Something else I learned during her panel is that in the episode with her naked scene? Not actually her. Yup, she said she made a choice and she stood by her choice and I think that’s amazing.

They needed a naked back for that scene and she didn’t want it to be hers and I give her major kudos for that.

Lena Headey did something similar in the most recent season finale of Game of Thrones. We see all of Cersei Lannister completely naked, but we’re not seeing Lena Headey who opted not to get naked.

Kudos to the women on screen. Erica and Alaina are right, there isn’t enough of you so I give you props for getting out there and being badass no matter what you do.

The final event of the night was the karaoke party (not spelt kareoke which is what I did all night) and this was great. I wasn’t sure if I was going to go originally cause I’d already gone back to my hotel, but I’m so glad I did cause it was so much fun.

There were so many people there and so many of the actors got up and sang. Richard, Rob, and Matt were dressed as the Three Amigos while Kathryn Newton (Claire Novak) came dressed as Sailor Moon and she was completely rocking the look.

From “Bad Blood” to “Lighters” to a lot of Bon Jovi, it was one of the best nights of my life.

There’s still two more days of Torcon left and plenty more to see and do. Hopefully I won’t spent too much money, but I’m definitely looking forward to seeing everybody on Saturday and then Jared and Jensen on Sunday! This is the first time I’ll be seeing them at a convention so I’m super excited!

Were you a Friday Person at Torcon? If you were I’d love to hear what you think!

If not I’d love to hear what you think anyway! Let me down below your thoughts on Supernatural, conventions, if you’ve been to a con in the past, or maybe just about the meaning of life. Whatever you want!

I’ll be posting soon about Day 2!

Also, I’m hoping that if I attend again next year I’ll have a proper camera and can take some better photos than the ones I got on my phone as my phone isn’t crazy about the bright lights they point at the stage. A lot of the pictures turned out either out of focus or, if they were in focus, the people were glowing. I got some good Saturday shots because some of the people like Mark Sheppard and Misha Collins wander through the audience which means they turn the lights back on. Yay! This means pictures turn out looking like people! Woohoo!